Six households of Matas and and Weilers and Eichlers and Clarks were represented at the crock pot Halloween held at Liesl and John's place in Howell last night. Lined up in the kitchen were pots of chili, potato mushroom soup and mac 'n' cheese. Veggies and fruit, fresh bread, chips, crackers, and salsa completed the menu.

The kids had little interest in food, but they ate heartily (now, that is a conundrum -- no interest in food and hearty eating!) both before and after tromping about the neighborhood on their trick and treat adventures. I did not spot a single child feasting on candy. There was too much good food to eat, prepared by three smart mothers of young children.


Half of the adults accompanied the trick-or-treaters. The rest of us were on door duty (handing out candy), kitchen duty (making coffee, serving chili), or on baby duty with Miss Vallanee. Clay got feeding duty. Val promptly showered him with whatever it was that she was eating. "Got another napkin?" was Clay's cry as he shoveled spoon after spoon of food into the small eating machine. 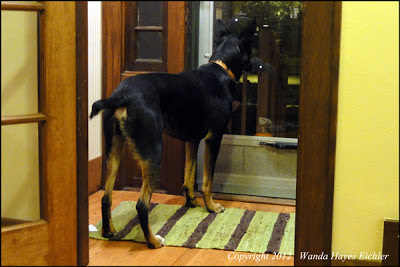 Mosby the Travelling Dog enjoyed all the comings and goings of the humans around him. He kept trying to get out the front door and finally stood watch as trick-or-treaters ascended the porch steps to receive their candy repasts.


An assortment of funky squash, curly gourds and little pumpkins decorated the dining table. Low votive candles tucked in among the assorted squashes added a soft glow. Liesl and John belong to a CSA that raised most of the interesting and edible decorations.
Liesl's text to me this morning captures our delight at being in Howell last night. "Thanks for driving down," her text says. "Finn told me he was happy to raise his hand in school that he would see his grandparents today."
And, yes Finny, your grandparents are very happy to have spent Halloween with you and your brother and your cousins and your friends. We love being a part of Howell Halloween.
Copyright 2012
Wanda Hayes Eichler